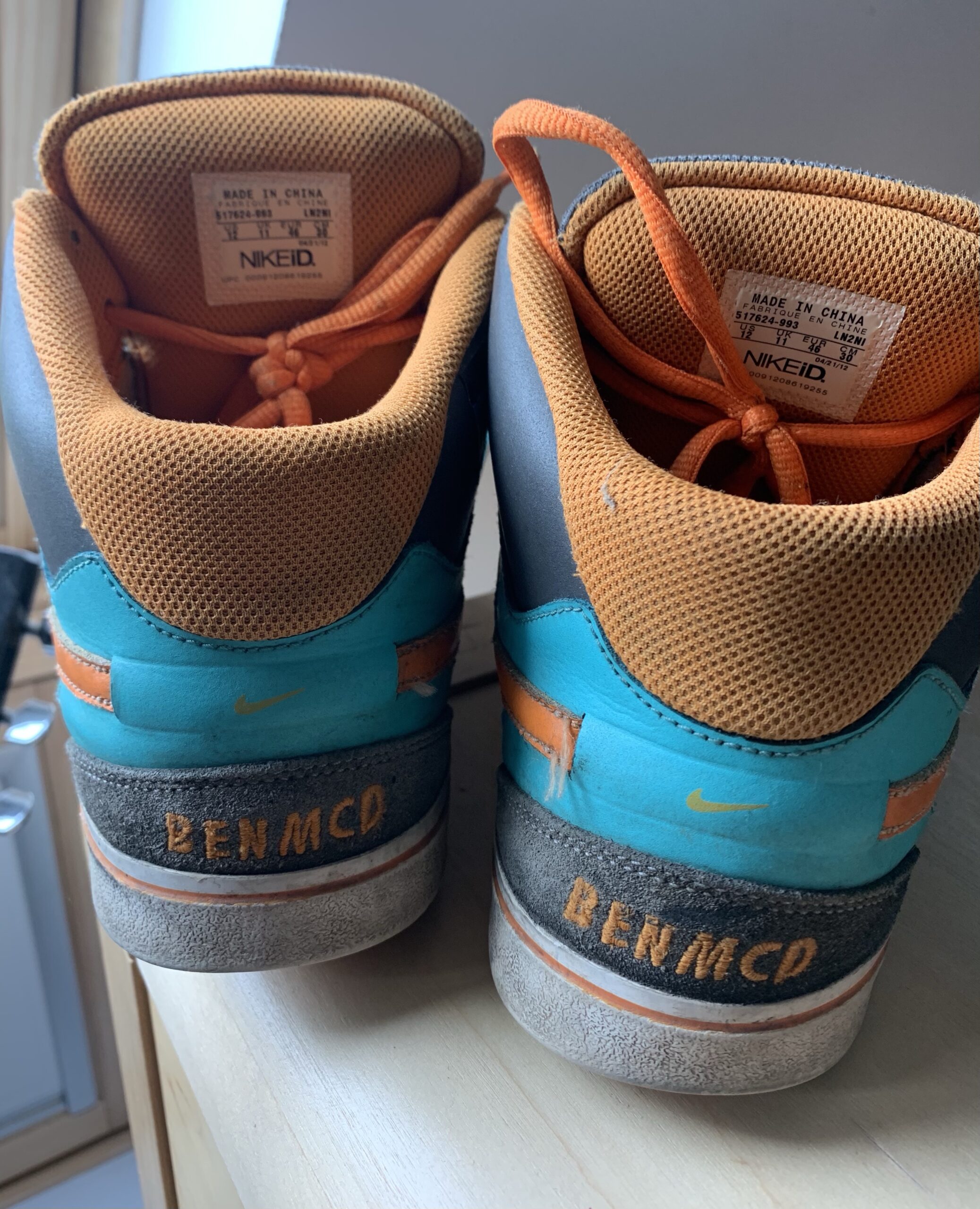 16 Feb A frying pan and other special things!!

Posted at 13:07h in Uncategorised by Ruth McDonald
0 Likes

I search for threads of you

I long for morsels of your presence

In everything I do

… even when it means feeling bloodied by the shards of grief

And the breathtakingly painful

Presence of your absence

I will always look for you

And I will always find you

As long as I can love.

To most people buying a new frying pan is nothing more than an expensive inconvenience. Something that has to be done when the non-stick surface (with the ‘lifetime’ guarantee) breaks down and everything you cook turns into a lumpy mushy mess!!

And … it’s something I’ve been putting off for ages!

You see, our frying pan isn’t just any old pan – it’s the pan that Ben used. And that makes it special. Every dent and scratch tells a story. It connects me to a different life – one that he was very much part of. In fact I blame him for most of the scratches as I’m sure he actually used it more than I did!!

You might not know this but when your child dies ordinary things become extraordinary! We hold on to anything that reminds us of them because it feels like it’s all we have left.

That old pan conjures up beautiful Ben images; cooking bacon and eggs for breakfast – lighting candles to humour me because I made such a fuss about the smell; meticulously frying steak to perfection for himself and his dad or surprising me with a speciality vegetarian risotto. Nothing was too much trouble – he made everything fun and we loved him for it.

Ben was passionate about cooking – creative and imaginative. Standing at the stove I’m sure I can feel him next to me – whispering that I’m not doing it right or hinting at a better way!!

He was one of those ‘good at everything’ humans – the kind everyone wanted to be with! He made every moment count. He brightened a room – brightened a day! Two years five months and the pain is just as raw.

God how I miss him

Back then, I could never have imagined that our humble frying pan (the one I constantly nagged him to be more careful with because it was ridiculously expensive) would be so precious. So much so that I can’t bear the thought of replacing it, or even worse, throwing It away. It’s another link – an invisible thread!

Letting go of anything that was Ben’s is almost impossible. When he died the thought of even just wiping away his fingerprints was unbearable. Everything that keeps us connected to him was and still is a treasure.

“Sometimes I touch the things you used to touch, looking for echoes of your fingers”

I think there’s a secret side to grief that makes us do weird things; yet what’s even more weird is that the weirdness starts to feel normal!

And I think that’s probably ok.

Powerful emotions knock us off our feet when we least expect it as we come across something that was theirs – a photograph, a handwritten note, a shirt hiding in the ironing pile or even an out of date jar of pesto (Ben’s favourite) lurking in the back of a kitchen cupboard!! Memories that feel like yesterday take our breath away and ignite a pain so deep it physically hurts – and can set us back for days!

So much changed the day Ben died – 7th October 2018. Part of us died that day too. The part that remains is completely changed because the life we knew was obliterated and reassembled differently.

The Japanese art of ‘Kintsugi’ is a good representation of our broken lives:

‘Kintsugi is the Japanese art of putting broken pottery pieces back together with gold — built on the idea that in embracing flaws and imperfections, you can create an even stronger, more beautiful piece of art’

Now we think and do things differently; we respond to situations differently; we have had to learn how to live again; how to fit into a world that looks and feels different. A world without Ben. Our scars may be hidden (because broken hearts are invisible) but they expose our vulnerabilities, shake our confidence and cause us to question what we thought we knew and understood. Bizarrely though they also give us a strength and empathy we didn’t know we had.

But I long for normal. I don’t want to be strong and I certainly don’t feel more beautiful!

Only a parent who has lost a child can truly understand the desperate irrational need to hold on to anything and everything that connects us to them; things that smell of them, that we picture them using; anything that takes us back to a time when life was beautifully uncomplicated.

“I can hear your absence in my soul, loud and luminous, sometimes it’s a hushed echo, lingering low and lurking loose but it never fades, it takes a break but it never breaks away. “

Yet there comes a point when we have to let things go – we have to face the gut wrenching agony of choosing what to keep and what to part with! Having already lost the most precious thing in the world, this just adds another layer to our brokenness.

There is something almost hallowed about our child’s ‘stuff’. By default, as their parents (especially if they still lived at home) we become the keeper of their possessions and guard them fiercely!! But we are also ‘blessed’ with the inconceivable task of sorting them out – deciding what to keep, what to pack away and what to give away.

Walking back into Ben’s bedroom the day he left us was brutal. His messy bed looked as though he had just got up – it was impossible to believe that he would never ever lie there again. His clothes casually discarded on the floor – I never realised how much you could love such an untidy mess!! I wanted everything to stay just as it was – to capture a snapshot of his beautiful life in my heart forever!! The room still smelt of him. It looked expectant; as though any minute he would casually burst through the door asking what was going on!!

And he never will.

Someone tidied his room – folded his clothes and made his bed. Selfishly I assumed that was my job. But there is no hierarchy in this kind of loss – parents brothers sister girlfriend friends – shattered people, wandering around the house in a daze; not really knowing what to do.

In the blink of an eye our safe world had exploded and without any warning we were catapulted into unchartered, unimaginable, inexplicable, ineffable, indescribable, unprecedented, horrific, frightening territory! We just did what instinctively seemed right at the time.

There really is no right or wrong way to cope. All we can do is push through another minute; another day; then suddenly another year! Yet it still feels like yesterday. The paradox of grief and the power of love!

If you’ve lost your child I’m quite sure you know exactly what I mean.

It’s simple and so wrong – our children should be here. Their death was out of order – it broke all the rules!

So two years later Ben’s toothbrush is still in the bathroom and his work shoes are still under the stairs – just where he left them. The colourful Nike trainers with his name embroidered on the back (that he was so proud of as a teenager) sit proudly on top of his wardrobe! The clothes he was wearing when he left us (cut from his body by the medics who tended him) are in a little pile on his dresser. I bury my face in them almost every day just to breathe in his scent. He’s still here! Death doesn’t erase your child yet I’m so afraid others will forget him.

And now I’m having to face the dreaded frying pan dilemma!!

So… I’ve finally done it. I’ve bought a new one and must admit that watching the eggs glide smoothly across the pan – without even the need for oil – does give me a moment’s pleasure!! I think even Ben would approve!!

But that old pan is staying firmly in my cupboard. I can’t let it go – not yet anyway!

I wear Ben’s work jumper every morning instead of a dressing gown – we all wear his snowboarding coats (he had a lot!!). His photos are everywhere – we drink his favourite drinks and listen to the songs he loved. We celebrate his life. His guitar will always have pride of place in his bedroom. We use his things, I work from home in his bedroom, at his desk. … I could go on and on.

A grieving friend told me she can’t bear to empty the rubbish bin in her son’s bedroom because even sweet wrappers hold memories.

Every time I see someone wearing Ben’s clothes, hear them sharing a memory or just speaking his name it makes my heart lurch as I smile through tears. Such beautiful reminders that he’s still part of our world and hasn’t been forgotten!!

My husband Paul put a huge board up in the garden with the words of the song Ben chose for his snowboarding video. It’s a reminder of his beautiful zest for life and his determination to make every moment matter!

But just as we all grieve differently – we all handle our precious child’s possessions differently. There are no rules and we must do what feels right! We have been forced to survive something that’s quite simply horrific – something that we never in a million years could have imagined doing! So we just follow our heart and hold onto love because it’s only love that keeps us going!

Nothing in the world could have prepared us for the relentless daily challenges of facing the unthinkable.

Everything about the death of our child is plain and simply wrong!

“Owning our story can be hard but not nearly as difficult as spending our lives running from it. Embracing your vulnerabilities is risky but not nearly as dangerous as giving up on love and belonging and joy – the experiences that make us the most vulnerable. Only when we are brave enough to explore the darkness will we discover the infinite power of our light “